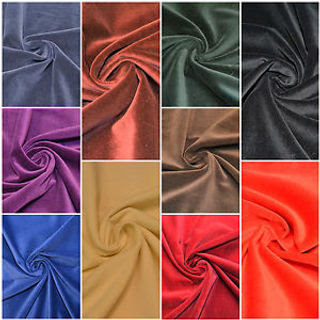 So, today we will be discussing velvet fabric in detail.

What is velvet fabric?

Velvet is a smooth, silky fabric often used in intimate apparel, furniture, and other textile applications. Velvet is generally connected with the nobility because of how expensive it was to create velvet textiles in the past. Despite the fact that most forms of current velvet are made with low-cost synthetic materials, this one-of-a-kind fabric remains one of the smoothest and softest man-made materials ever created.

Velvet fabric was first mentioned in the 14th century, and historians thought it was made in East Asia and then transported to Europe through the Silk Road. It used to be made entirely of silk, and it was a very popular material. It is even more luscious and beautiful than Asian silk, because of the unique industrial techniques required to create it.

Until the Renaissance, when velvet became fashionable in Europe, this fabric was widely used throughout the Middle East. It was a favored fabric among the region’s aristocracy, according to documents from several civilizations located within the borders of modern-day Iraq and Iran.

Velvet manufacturing became significantly less expensive after the invention of machine looms, and the development of synthetic materials. These materials approach the characteristics of silk ultimately brought the wonders of velvet to even the poorest members of society. While today’s velvet may not be as pure or unique as velvet from the past, it is nevertheless appreciated as a fabric for curtains, blankets, stuffed animals, and a variety of other soft and cuddly items.

How is velvet fabric made?

While velvet can be made from a variety of materials, the process for making it is the same regardless of which base textile is used. Velvet is only woven on a special loom that spins two layers of fabric at the same time. After that, the fabric layers are separated and wound up on rolls.

Velvet is made with vertical yarn, while velveteen is made with horizontal yarn. But both are made using largely the same processes. Velveteen, on the other hand, is frequently mixed with regular cotton yarn, lowering its quality and altering its texture.

Silk is made by unraveling silkworm cocoons and spinning the threads into yarn. It is one of the most popular velvet materials. Petrochemicals are converted into filaments to make synthetic textiles like rayon. Depending on the intended application, one of these yarn types can be dyed or treated after being woven into velvet cloth.

How is velvet fabric used?

Velvet’s main selling point is its softness. So it’s mostly used in applications where the fabric will be in close proximity to the skin. Velvet, on the other hand, has a distinct visual allure. That’s why it’s frequently used in home decor, such as curtains and throw pillows. Velvet, unlike some other types of interior decor, feels as good as it looks, making it a multi-sensory home design experience.

Velvet is sometimes used in bedding because of its softness. Insulative blankets, which are placed between sheets and duvets, are commonly made of this fabric. Velvet is far more common in women’s clothing than in men’s, and it’s frequently used to accentuate womanly curves and create stunning evening wear. It is commonly used in glove linings and some stiff forms of velvet are used to make hats.

Where is velvet fabric produced?

The majority of velvet is produced in China, as it is the case with most textiles. However, because this fabric can be made from two different types of textiles, it’s important to go over each one separately.

China is the world’s largest silk producer, but India is not far behind. Indian silk is, on average, more likely to be certified, and it is usually of higher quality.

China is the most prolific producer of rayon in the world. China has quickly become the world’s largest polluter as a result of these and other reckless industrial practices, and it is lagging far behind the rest of the world in making the transition to sustainable fabrics and non-polluting production processes.

How much does velvet fabric cost?

Velvet made of synthetic materials is usually very affordable. Full-silk velvet, on the other hand, can cost hundreds of dollars per yard due to its labor-intensive nature. Velvet fabric made with care and sustainable materials will always be more expensive than fabric made with synthetic textiles.

What different types of velvet fabric are there?

Hundreds of different types of velvet fabric have been developed over the centuries. Here are just a few examples:

This ultra-sheer velvet, also known as transparent velvet, is frequently used in formal garments and eveningwear.

Crushed velvet, perhaps one of the most distinctive types of velvet, has a varied texture that is achieved by pressing or twisting the fabric while it is still wet. It rises and falls in a way that is both randomly organic and visually fascinating, rather than having a uniform surface.

Words, symbols, or other shapes are embossed into this type of velvet. In most cases, the embossed section is slightly shorter than the surrounding velvet, and the embossing effect can be felt.

This type of hammered velvet has been firmly pressed or smashed rather than crushed, and is considered one of the most lustrous. The resulting fabric has a dappled appearance and is reminiscent of a soft, warm animal’s coat.

Lyons velvet is much denser than other types of velvet, resulting in a stiff fabric that is ideal for a variety of outerwear applications. It is regarded as one of the most luxurious outerwear materials available, from coats to hats.

While the term “panne” can refer to a variety of velvets, it was originally used to describe a type of crushed velvet that was subjected to a single-direction thrusting moment. Panne is now more commonly used to refer to velvet that has a bunched appearance.

Although crimped velvet has largely fallen out of favor, it is still occasionally used in dresses and eveningwear.

The patterns on this velvet are created by alternating pile and non-pile sections. This type of voided velvet can be made in a variety of shapes and designs, making it similar to embossed velvet.

Velvet was originally only considered “ring velvet” if it could be drawn through a wedding ring. Ring velvet is similar to chiffon in that it is extremely fine and light.

How does velvet fabric impact the environment?

Because “velvet” refers to a fabric weave rather than a material, it is impossible to say that velvet as a concept has any environmental impact. Velvet, on the other hand, is made from a variety of materials that have varying degrees of environmental impact that should be carefully considered.

Environmental impact of rayon and other synthetic textiles

Rayon is the most common silk substitute in velvet and velvet-inspired fabrics, and the manufacturing of this synthetic material is extremely damaging to the environment. Multiple chemical washes are used in the rayon production process, and petroleum is used as the base material.

In essence, rayon is a non-biodegradable fossil fuel product that releases a large amount of harmful chemicals into the water supply during the manufacturing process. With all of these critics in full view, the only reason rayon is still produced is because it is cheap.

A variety of certifications may be awarded depending on the material used to make a velvet fabric product:

Always check that your silk is certified by Silk Mark, the world’s leading authority on silk sustainability and quality. Silk production has been a part of Indian life for millennia, and Silk Mark ensures that the silk produced meets all cultural, environmental, and humanitarian standards.

If synthetic textiles can be proven to contain only recycled materials, they will be certified by the Global Recycled Standard (GRS). However, because rayon, the main component of synthetic velvet, is difficult to recycle, new materials are typically used to create this common velvet component.

Beautiful Connection Group is one of the best clothing manufacturers in the USA. They provide anything customized regarding female fashion clothing. They never compromise with the quality. So, you can check out their website for once…

PrevPreviousHow to Paint on Fabrics : Pro Tips for Fabric Painting in 2023
NextViscose Fabric: Details on Viscose Fabric in 2023Next